Rosie and Rudy are sister and brother. For over 12 years, they’ve eaten together, played outside together and followed their master, Wendy, around the house from room to room. Part Boxer and part Labrador, they are bigger, sturdier dogs. Rosie has a black coat, now with white around her aging face and Rudy is brindle with the same aging signs.

We met after I had been coached and counseled not to be afraid of them.

Let me backtrack to when I was six years old and had my first-of-four traumatic experiences with dogs. I was going to play with a new friend I met in kindergarten, he lived only a couple of blocks away. I started down his driveway, which was an alley between two houses when the biggest dog in the world came from the backyard barking and running at me. I ran for my life towards home but the dog caught me.

It was the kind of dog I’d seen in a Bugs Bunny cartoon. The kind that rescued Yosemite Sam from a snow avalanche. 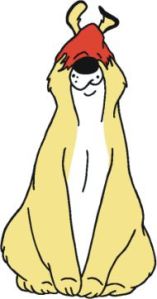 So he tackles me in the grass and all six years of my life pass before me. I try to get up but he keeps licking me and…I escaped and ran home screaming. I can still hear a man’s voice laughing from behind me, “he won’t hurt you, he’s just playing!”

A couple of years after, and a couple of actual dog bites later, I believed that dogs were created to make my bike rides and summer walks to the sandlot miserable. Just the sound of a dog tag tinkling on its collar would bring tears of fear to my eyes.

My brother, Bill, and I were walking home after a neighborhood game of Wiffle Ball when I spotted a dog on a front porch sleeping under a hammock. It’s owner, in the hammock, was also asleep. A moment later the dog had quietly run up behind us and bit me on my left calf. I ran the rest of the way home. My mom treated my open wound with Mercurochrome, an antiseptic that stung worse than the bite, and my dad took me back to have a talk with the dog’s owner.

When hammock guy answered our knock and looked through his screen door, my dad gave a 15-second recap. Hammock guy looked down at me and asked “what did ya do to my dog, son? Did ya throw a stick at him?” He looked at my dad, “my dog would never bite someone unless they were doing something to him.” I decided then dog owners were also created to make me miserable.

For the next 42 years, when I encountered a dog on the street acting maniacal, I would simply call the police and wait for them to arrive. From across the street, I’d point and smile. I was a jerk.

I met a woman at work many years ago whom I admired and we remained friends for over 20 years. After our first marriages failed, we began dating and when I learned she had two dogs, Rosie and Rudy, well…gulp.

But I knew there was no way I was giving up this relationship because of a couple of d…dohh…dohhh…gulp.

I told Wendy my story and asked her for help. She taught me why dogs act the way they do.

She said “they’re probably scared of you. Be the Alpha. Show your confidence. It will make the dog less anxious. When you go out for your jog and a dog is coming your way just say “hello” to the owners. Don’t look at the dog. You own the path, not the animal. Act like you own the path.”

Wendy said when I realize the dogs will just pass me by, over time I’ll be more confident and come to appreciate them instead of fear them. She was right. I practiced more than a year and I slowly became more and more friendly with dogs. It’s a wonderful freedom I hadn’t expected. It was time to meet Rosie and Rudy.

Wendy had bought a new home and positioned me in a living room chair in front of a baseball game. I love baseball. When she drove up with the dogs, heads out the back windows of the car, I suddenly couldn’t swallow. Rudy was a picture of my most terrifying nightmare. Dark eyes, barrel-chested and a square head.

I knew one thing. I trusted Wendy. She’s very intelligent, a graduate of Michigan State University. She’s talented, funny, insightful, understanding. Most importantly, she never steered me in the wrong direction. She was patient and enjoyed explaining dogs. She listened to my stories and understood my anxiety. I knew she cared deeply for me. Our trust for one another is intense.

Having trust is a fantastic thing. It’s one of the four pillars I use when I talk about great relationships: Fellowship. Intimacy. Support. Trust. Did I trust Wendy enough to claim this living room? As the Alpha in the home? Yes, I trusted her completely. But I still couldn’t swallow. Oh, and I had stopped blinking.

The back door opened and in came the dogs with tags tinkling on their collars. Gulp.

Nightmare dog Rudy came into the room. I kept watching baseball. I love baseball. He put his nose on the back of my right hand, sniffed a bit, licked me and trotted off to other parts of the house. Gulp.

Over the next several months spending time with the two of them and even doing some dog sitting, I had a meltdown or two. But Wendy was always there to counsel. Endless patience.

It’s been over six years. Today Rosie and Rudy are among my most treasured friends. Their love is unconditional even when mine is not. I love to feed them, get them exercise, tell them how I’m feeling and worry about them constantly. My health has improved significantly since changing my heart. The freedom I found in acceptance and leaving the anger and anxiety behind, has been life-changing. The animal kingdom needs our love and attention. Yes, to my friends I haven’t seen in a few years, I just said that and it’s true.

My trust for Wendy is deeper today and every day. Try giving something up that you’re strong-willed about. Give up your fear and anger. Find someone you trust to do it with. You may have a hard time swallowing, but it will help you grow and your relationship will thrive. Give trust a try.  Really try. I did. I’m a lucky dog.

3 thoughts on “This Lucky Dog”