I opened the front door of the house. “Let’s play ‘Wrigley Fielders'” Curt and Brian yelled! Curt is my oldest son, Brian is youngest of the two. It had been a full day at work and a seat out on the deck with a beer could have been my direction. But it was a perfect day for “Wrigley Fielders.” Mostly cloudy skies would make it easier to see the ball. I changed my clothes, we put on our ball caps, grabbed a tennis racquet and baseball gloves and went to the backyard. Because I had a belief about “play.”

As I’m writing this, it’s almost summer.  Children are playing on trampolines and bikes. Not many, but I’ve seen them. I wish there were more adults jumping and riding with them. It’s how toys work. When I bought a toy for our kids, I made sure I was on the floor with them. We seem to want THE TOY to entertain the child. But the joy of the toy, the fun, and creativity in playing can be much greater when grown-ups join in. 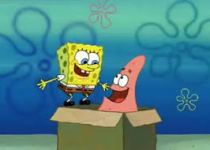 “They played with the box more than the toy!” Yeah, heard that before. I don’t know why a kid would rather play with the box, but my kids never got a chance to play with the box. We were too busy combining the new toys with old ones to make adventures for dolls, Weebles, plush animals, ball gloves. 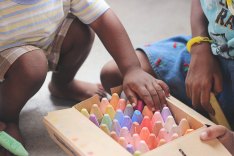 I was listening to a podcast about some folks building a toy company and the research that was going into making toys that children would spend the most time with. Yawn. They never mentioned how the grown-ups near the toy could help teach the child to make it come to life. Put that in your research pipe.

Some of the greatest joy in raising my three children was playing. It began as early as possible with each of them. Yes, I’m bragging. You can read about the psychology of toys and play ( https://www.psychologicalscience.org/observer/toy-stories). There is plenty of research. But my job is to motivate you to “train” your children. Show them. Teach them. Talk to them like people (drop the baby talk) before, during and after playtime. Here’s how:

Learning to play is a process. From the time our babies could sit up, rolling a ball to them and getting them to roll it back was fantastic fun. The room would brighten with their smiles and fill my world up with their laughter. Soon there was tossing the ball, bouncing it, and creating games of “scoring” when the ball lands in a bucket or intentionally knocks over other toys. As your kids graduate to higher thinking and playing, the games can get more lively.  It’s a process. Be patient. What was once a miniature nine-inch soccer ball becomes a perfect ball to catch when someone is tossing it to you – while you’re in the air over a trampoline or a pool of water. Learning to play, imagine and create is a process. Start it as early as possible. If you haven’t been doing it and your child is a bit older and stuck on video games – better have a few talks before you coerce them outside to play a game of Wiffle Ball. Don’t like the physical play? Coloring, puzzles, and model building are a few ways to play together. Children, grown-ups, learning to play together. Yeah!

Repurpose old toys. Toys don’t have to be used for what they were intended for. Okay, okay, I understand safety. I’m not talking about juggling fireworks (can’t stand ’em). But don’t overlook creative play by repurposing toys. “Wrigley Fielders“  was a game my two sons and I made up when they were eight and ten years old. We thought it was great fun but it also helped with hand-eye coordination and practice catching fly balls for baseball games. In the backyard, I would use a tennis racket and tennis ball. I would hit the ball as high as I could and the boys would take turns “calling it,” (a baseball term for letting your teammates know you would handle catching the fly ball for an out). Like this: “I got it! I got it!” Then we’d take turns being the batter. We’d play for an hour or until it was time for dinner and then we’d go back for more. It was easier on cloudy days because you had a backdrop for the ball…you know, depth…anyway.

Don’t be shy. Be intentional and teach. My daughter Tara and I used to play “Friends.” When she was three through five years old we had toys from her favorite movie (1995) “Toy Story,” and an assortment of stuffed people and animals. Our “friends” included a couple of chickens she named “Huckle” and “Lola” and a cat (Beanie Baby) named “Pet Dog.” I can’t stop smiling just writing that!

We would set up scenarios that could be close to real life. The friends would go to school, go shopping or prepare a meal together. Except for an occasional, and intentional, burp or passing of gas, we tried to teach our “friends” (giggling) proper manners! When it came to baseball, Tara loved to play catch. To add a more physical challenge, we’d practice “turn a run.” She would usually say “make me turn and run!  I’d yell “turn and run” while intentionally throwing the ball over her head. She would have to run with her back to me in order to make a Willie Mays-style catch. We still play this game. She’s 25. Here was Mays’ catch. He did it just like Tara does.

Enough examples. You get it. Wait, there is one more. That trampoline. We had countless hours of great fun creating games, telling stories, and having contests on that thing. Since my daughter, Tara was born seven years after my youngest son Brian, they did not always have the same experiences. The boys and I created a game called “Interception” that involved the two of them keeping a football or other ball away from the other while jumping. Tara liked being introduced as if in the Olympics and then would perform high jumps, flips, and twists. I would pretend to be an international judge and she would win a medal…usually gold. But not always. You know, in the interest of keeping it real.

The Challenge: Dear people, my challenge to parents and grandparents: The next toy you make or purchase for a child, ask yourself how you will be interacting with them and that toy. Imagine if action figures will need a special voice, how older toys can be combined with a new one and what scenario could be created to teach manners, problem-solving and laughter. It’s how toys work. Go get your tennis racket and baseball gloves and hit a few “Wrigley Fielders.”