While dad was not the best communicator, he did want to connect. It was difficult for him though. When I was 12 I found a slide carousel that belonged to my older brother. Yeah, one of those things. 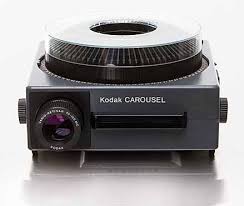 It had some slides of inadequately clothed, and some half-clothed, women. A couple of buddies and I would project the slides onto the wall in my bedroom and make comments about what the women must be thinking. 12-year-old style.

I had been riding my bike all over town one day and when I finally came home my dad was sitting in the kitchen, that carousel was sitting with him in the middle of the table. I greeted him, glanced at the naughty thing and kept walking. That was the end of it. No words were spoken. Years later when I asked him about it, he said he didn’t remember. I’m still curious who ratted me out.

Dad was not a “look you in the eye and tell you like it is” kinda guy. He had a few philosophies he’d make sure everyone knew about, but not with words. For example, he always wanted to be on time. He wanted everyone else to also. He’d let us know by getting in the car and beeping the horn repeatedly to get our attention. The problem with that communication was I didn’t want to be in the car when he was honking and muttering under his breath nor did I want to be in the house with the uneasiness of my mom running around yelling “oh Don!” every time the horn blared. His horn approach didn’t work. The same routine went on for years.

While dad was not the best communicator, he did want to connect. It was difficult for him though. He grew up poor. My grandma and grandpa were sharecroppers and my dad was the youngest of nine children. Grandma his mom died when he was 10 years old. (The next part is tough to write, so it might be tough to read.) It was on the farm in 1937. If you’re not familiar, to get the hair off pigs some people kill the pig, then scald it in a vat of boiling water. My grandpa and grandma were prepping a vat of scalding water when grandma slipped on the wet floor. The large pot she was carrying poured out on her (“landed on her” was the phrase dad would use.) Details of what happened next are incomplete. She died that day of her wounds. Grandpa walked to the school to get dad and my uncle. They walked home together in silence and when they got there he told them their mom was gone. I’m sure my dad knew a few more facts but didn’t want to share them. Not long before he passed he was sharing the story with Wendy and at 90 years old it still made him cry. “That was a bad time.”

He managed to get through the 10th grade and when he turned 18 he joined the Army and caught the end of World War II. He came home for a while before enlisting in the Navy.  Soon after the Korean War began. Once again, he didn’t want to discuss details. When he fell asleep on the couch he usually woke up yelling something incoherent. Sometimes it was clear: “Get your heads down!”

While dad was not the best communicator, he did want to connect. It was difficult for him though. He was a factory worker/press operator until I was in high school when he hurt his back and took disability for many years. He did want to connect. He taught me how to catch a baseball. He came to all my sports games and events. But it was the little outings and games he made up, that we could do together without a lot of conversation, that are clearest in my memory.

“You boys want to go for a ride?” That indicated there may be “coasting” or “racing” coming up. The other boy was my brother, Bill. He’s four years older. With a manual 3-speed transmission in a 1968 Ford Falcon, we would head for the country.

Yeah, it was white like that one! Great car. “Can we coast, dad?” He would laugh, “if we find a hill.” Then at the crest of a large hill, I would stand up in the back seat and flop myself over the front seat so I could watch. He would put the car in neutral and turn off the engine. In delightful quiet, we would coast down the hill. I’d put my head out the window. He knew how much I enjoyed it. He’d made a connection.

Even better. During some of the rides, dad would turn to the back seat and say “you boys want to race?” Oh, the happiness tangled up in suspense! On a country road, he’s stop the car. I’d get out, my heart pumping wildly. Sometimes Bill would join but I was usually on my own. Mom would sit and smile. Dad would roll down the window to give instructions: “Okay…see that fence with all the trees up there?” He’d motion towards the windshield with his right hand, cigarette between his index and middle finger. “Uh huh.” “I’ll race you there.” “Okay! Tell me when to go!” I’d go around the front of the car, assume my starting position and dad would yell “Go!” I’d put my head down and begin running. I could hardly breath – the excitement that came with the probability of winning. I knew I could do it. Especially when I’d look back and he hadn’t even started yet! “What is he waiting for? I’m gonna win if he just sits there. Maybe he forgot it’s a race.” The hot sun, the gravel country road, the unfamiliar surroundings, the smell of the grass and woods. My gasping for air. Do I dare look back again? I’d chance another look. “Oh no, he’s coming!” I’d nearly start to choke. “I’m almost there but he’s gaining on me fast.”

*Note: When I was a bit older, I realized that in order for dad to win, he would have had to run over me. Details, details.

I always made it to the finish line. The trees and fence place, maybe a stop sign or old gate leading to a cow pasture. I’d collapse in the grass and a moment would pass until I could hear the car slowly pull up. The gravel crunching beneath the tires. I’d jump in the back seat covered with sweat. “Wow, you’re getting faster” he’d say. I’d look at my mom. She’d look back at me with a big smile. I’d look at Bill, he’d shake his head. We’d drive on down the road, my confidence soaring. “I’m am so fast.” Connection made.

And the rest of it. He came to all my sports and events. He taught me how to catch a baseball. He showed me how to change a distributor cap. When he wanted more coffee in his cup I’d race to the coffee pot and he’d hold his cup out over the floor – and when I poured he would lower the cup making me keep the pour steady into the cup that was now a few feet down! He and I would sit at the table for hours and listen to country music while he drank his “iced tea” (wink). I would change the records. I still know the words to all those songs. He would talk about the things that bothered him, but with no detail. The wars, debt, the future. Still, the connection made.

On a Sunday afternoon, dad would announce “we’re going to ride the escalators!” A trip to JC Penny in Grand Rapids. Or “let’s go skip stones!” A short ride outside of town to Whites Bridge.

When I needed him, car out of gas or sports injury needing immediate attention, he’d take care of things.

How are you making connections? With your kids? Your co-workers? Neighbors, friends? Make it a priority. You may not be a good communicator, but there are many ways to connect. You’ll find the more you do you’ll experience greater personal growth and a fuller life. And you do want to keep growing and you do want a full life.

I saw him die three times because of one ailment or another but he came back each time. But not on March 22nd, 2018 at 3:50am. This Father’s Day, 2018 is significant because he passed away four months ago. He was 91. I think of my friends whose fathers passed away well before their time. I think of them often, knowing I was blessed to have my dad all those years. And I was thrilled when Wendy reminded me he’s reunited with his mom and dad. He hadn’t seen her for over 80 years. And grandma has no scars.

One thought on “How My Dad Made Connections: In honor of those who’ve lost their dad’s before their time.”